The BEAR augmented reality engine allows real-time display of static or animated 3D objects. This 3D engine has a constant shading display, so the 3D objects are displayed in a uniform light from any angle. It supports the use of jpg-like image textures but also png and gif, thus allowing the display of partially transparent objects.

All elements of the animation (model, texture, etc.) should be packed into a single ZIP file. 3D objects and animations are downloaded completely before showing in the app (unlike videos that are streamed) so it is essential to upload files in the platform that are not too large and will be downloaded by the mobile app fast enough to ensure a good user experience.

An animation weighing 20MB may indeed take a long time to appear in the app if the internet connection is not good enough, and discourage mobile users from watching the animation. 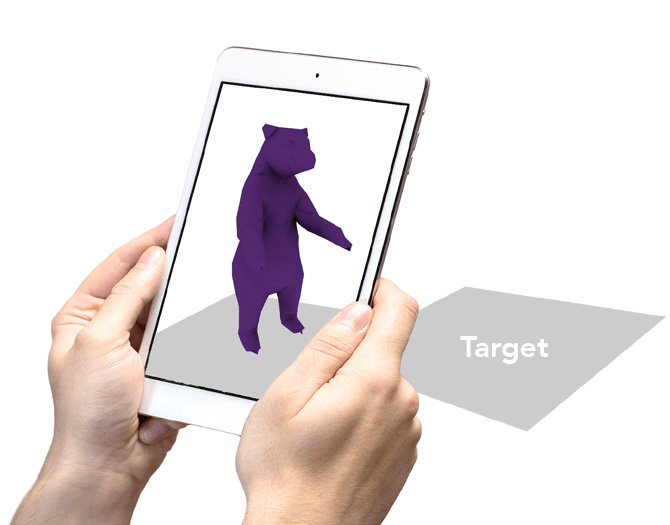 The creation of 3D content for rendering into the BEAR 3D engine shall be done through third-party software. Many solutions exist, such as the open-source software Blender, cinema4D, 3DSmax, etc. The 3D software used must be a polygonal modeler, and allow the export to the FBX format.

The active view display setting should be set to ‘constant shading’ in order to work with a preview that will match the display in the BEAR 3D engine. In addition, the creation of textures will be done through an external image editor such as Photoshop, allowing creation of JPG, PNG and GIF files. 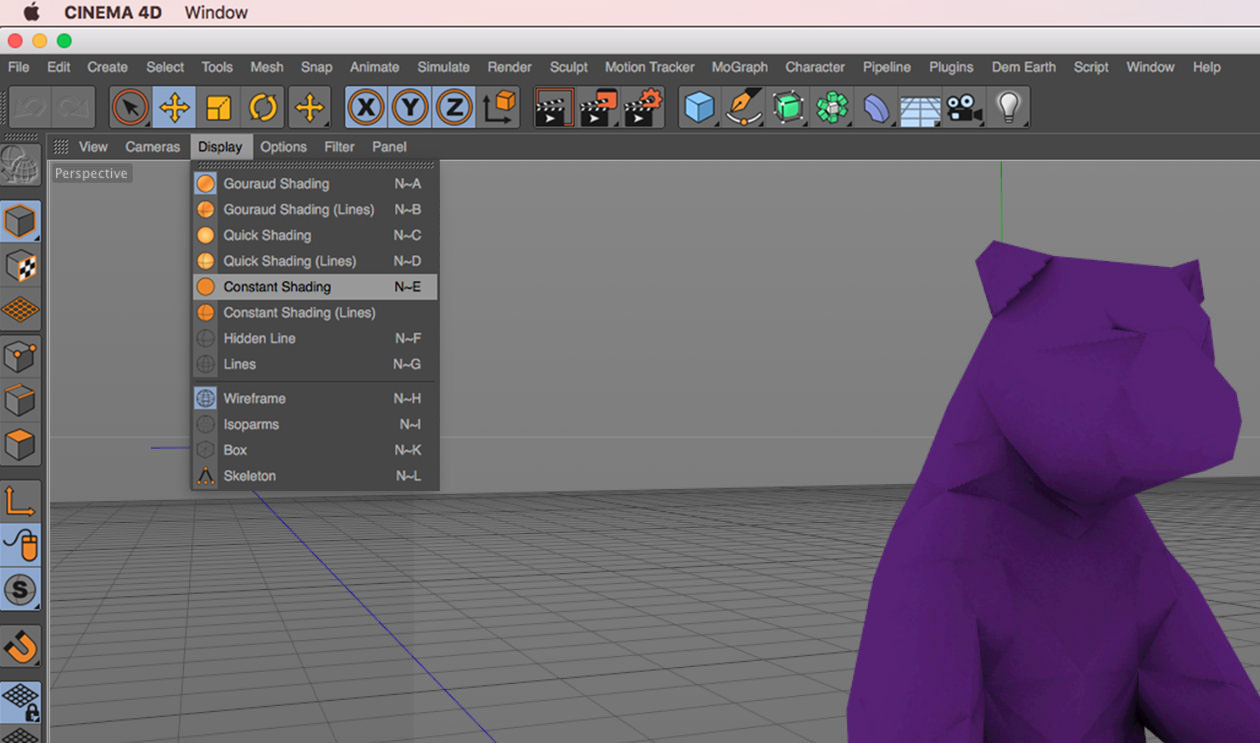 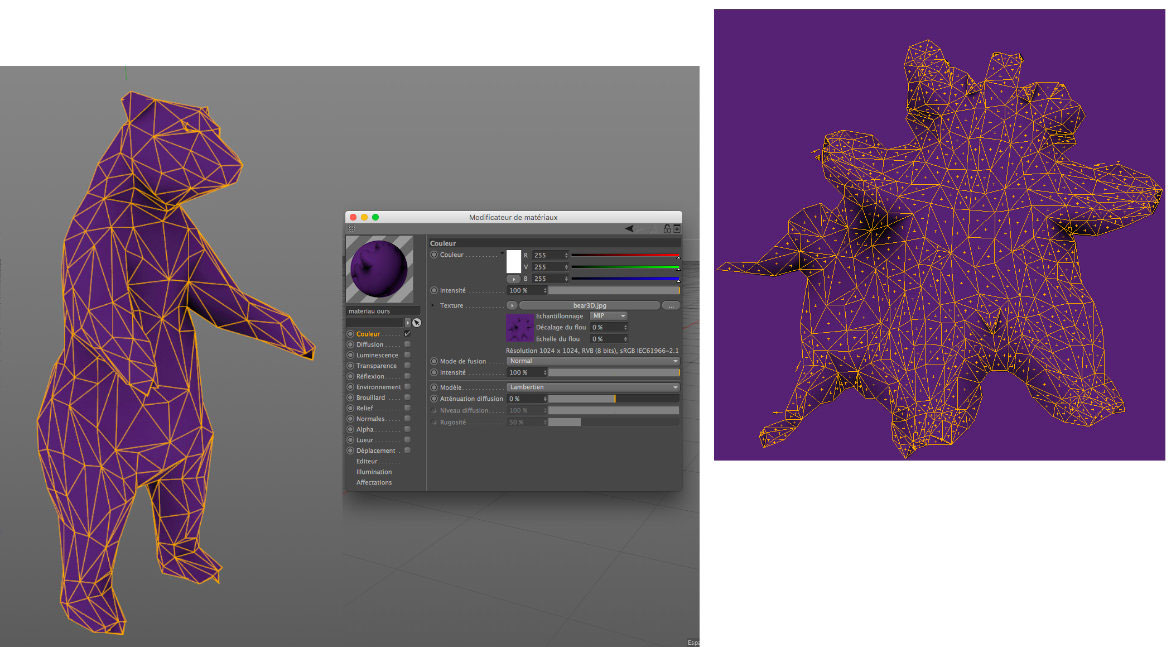 Here in cinema4D, a mesh object made of 3-sided polygons. The related material has only one color channel comprising a texture. On the right, the mesh is unfolded according to the UVW coordinates embedded in the object, and the related texture.

Please note that for the use of PNG textures with transparency, it is not necessary to have either an alpha or transparency channel activity: the color channel with a png texture is enough for transparent display in BEAR 3D engine.

In case you want to use several objects with transparency into the same 3D scene, you will have to follow the following hierarchy : objects at the foreground of your scene should be positioned first in your objects list (e.g. at the bottom of list in cinema4D).

Plan 1 at the very bottom of list, then Plan 2, and so on so forth.

As an alternative, you may also merge all your objects into a single one.

Here in cinema4D, a classic hierarchy. Each object is animated relative to its parent

Exporting the created 3D scene can only be done via the FBX or OBJ format. The export settings must be: 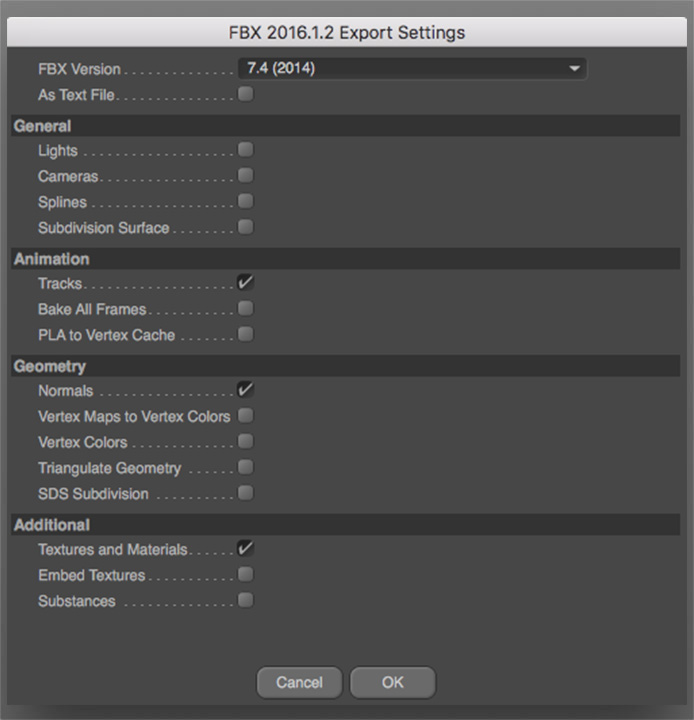 The cinema4D export FBX panel, with the parameters required for use in BEAR 3D engine.

The Maya export FBX panel, with the parameters required for use in BEAR 3D engine.

Here are some examples and recommendations to investigate if you want to improve the quality of your 3D content:

Was this article helpful to you? Yes No 1

How can we help?